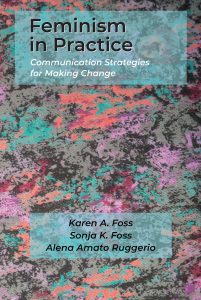 Readers with an interest in feminism will find the two opening chapters especially useful. Chapter 1 defines feminism, raising issues with the typical definition of feminism as the effort to achieve equality between women and men. It concludes with a description of over twenty types of feminism, including cosmopolitan feminism, ecofeminism, girlie feminism, Indigenous feminism, power feminism, and womanism. Chapter 2 describes the triggering events, happening places, and key ideas of the four waves of feminism. Taken together, these opening chapters provide readers with a comprehensive understanding of the diversity and complexity of feminist movement.

Readers with an interest in the processes of change also will find the book a valuable resource. It is organized around five primary objectives that animate contemporary change efforts—proclaiming identity, naming a problem, enriching a system, changing a system, and creating an alternative system. Each objective is developed through theoretical assumptions and twelve change strategies that show it at work in feminist movement. Feminism in Practice  also serves as a practical handbook that readers can use to experiment with the strategies and expand their toolkits for creating change in their lives and worlds. 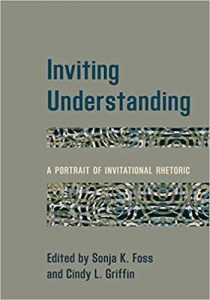 Inviting Understanding: A Portrait of Invitational Rhetoric is an authoritative reference work designed to provide a comprehensive overview of the theory of invitational rhetoric, developed twenty-five years ago by Sonja K. Foss and Cindy L. Griffin. This theory challenges the conventional conception of rhetoric as persuasion and defines rhetoric as an invitation to understanding as a means to create a relationship rooted in equality, immanent value, and self-determination. Rather than celebrating argumentation, division, and winning, invitational rhetoric encourages rhetors to listen across differences, to engage in dialogue, and to try to understand positions different from their own.

Organized into the three categories of foundations, extensions, and applications, Inviting Understanding is a compilation of published articles and new essays that explore and expand the theory. The book provides readers with access to a wide range of resources about this revolutionary theory in areas such as community organizing, social justice activism, social media, film, graffiti, institutional and team decision making, communication and composition pedagogy, and interview protocols.

Current cultural, social, and political divisions in the United States and across the world suggest that the principles and practices of invitational rhetoric are sorely needed, and a volume that demonstrates its application in various contexts may inspire readers to put it into practice in the contexts in which they work and live.

This book may be ordered from Rowman & Littlefield: rowman.com 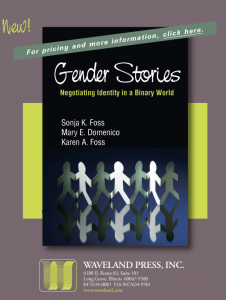 Essential for anyone who seeks to understand the contemporary gender landscape, Gender Stories defines gender as the socially constructed meanings that are assigned to bodies. The book helps readers navigate issues of gender by introducing them to the ubiquitous gender binary, the problems with much of the research on gender differences, and the variety of gender stories in popular culture.

At the heart of the book is a description of the process of becoming a gendered person through crafting and performing gender stories. Because each gender performance is unique, a virtually unlimited number of genders exists—not just two, as the gender binary would have us believe. The same multiplicity that characterizes the gender landscape characterizes the individual, who typically changes gender multiple times a day and across the lifespan.

In Gender Stories, personal gender performances are framed within a philosophy of choice. Readers are encouraged to become more conscious of the choices they have in constructing their gender identities and to allow others the same choice by respecting their gender performances. Readers will easily find a place for themselves in the book, regardless of their views on gender, because one perspective on gender is not presented as the right one. Gender Stories affirms and legitimizes diverse perspectives as providing more comprehensive knowledge about gender for everyone. 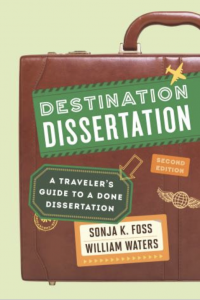 Your dissertation is not a hurdle to jump or a battle to fight; as this handbook makes clear, your dissertation is the first of many destinations on the path of your professional career. Destination Dissertation frames the process of successfully completing your dissertation as a stimulating and exciting trip–one that can be completed in fewer than nine months and by following twenty-nine specific steps. Sonja Foss and William Waters–your guides on this trip–explain concrete and efficient processes for completing the parts of the dissertation that tend to cause the most delays: conceptualizing a topic, developing a pre-proposal, writing a literature review, writing a proposal, collecting and analyzing data, and writing the last chapter. Crafted for use by students in all disciplines and for both quantitative and qualitative dissertations, the book incorporates a wealth of real-life examples from every step of the journey.

TABLE OF CONTENTS:
1. Preparing to Go: The Dissertation Journey
2. The Journey Before You: 29 Steps
3. Planning the Trip: The Conceptual Conversation
4. Developing Your Itinerary: The Pre-Proposal
5. Advice from Other Travelers: The Literature Review
6. Getting There: The Dissertation Proposal
7. Things to See and Do: Data Collection and Analysis
8. Making the Most of Your Travels: The Last Chapter Plus
9. Useful Phrases: Writing and Editing
10. Travelogue: The Dissertation Defense
11. Making the Best Use of Your Guide: Advisor Advising
12. Avoiding Delays and Annoyances: Enactment of the Scholar Role

This book may be ordered from Rowman & Littlefield: rowman.com 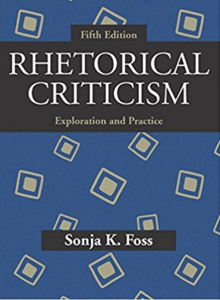 Over multiple editions, this transformative text has taught the lively art of rhetorical criticism to thousands of students at more than 300 colleges and universities. Insights from classroom use enrich each new edition.

With an unparalleled talent for distilling sophisticated rhetorical concepts and processes, Sonja Foss highlights ten methods of doing rhetorical criticism–the systematic investigation and explanation of symbolic acts and artifacts. Each chapter focuses on one method, its foundational theories, and the steps necessary to perform an analysis using that method. Foss provides instructions on how to write coherent, well-argued reports of analytical findings, which are then illustrated by sample essays.

A chapter on feminist criticism features the disruption of conventional ideologies and practices. Storytelling in the digital world is a timely addition to the chapter on narrative criticism. Student essays now include analyses of the same artifact using multiple methods. A deep understanding of rhetorical criticism equips readers to become engaged and active participants in shaping the nature of the worlds in which we live.

Thorough in scope and highly accessible, this volume introduces the reader to the thinkers who have exerted a profound influence on contemporary rhetorical theory. The brief biographical sketches locate the theorists in time and place, showing how life experiences influenced perspectives on rhetorical thought. The concise explanations of complex concepts are clear and provide readers with a solid foundation for reading the major works of these scholars. The critical commentary is carefully chosen to place the theories within a broader rhetorical context. Each chapter ends with a complete bibliography of works by the theorists. Previous editions have been praised as indispensable; this edition is equally essential.

Twenty-five selections written by important rhetorical theorists (Jean Baudrillard, Kenneth Burke, Michel Foucault, Ernesto Grassi, Jürgen Habermas, bell hooks, Chaïm Perelman and Lucie Olbrechts-Tyteca, I. A. Richards, Stephen Toulmin, and Richard Weaver) allow the reader to sample the multiple voices contributing to the creation of knowledge through rhetoric. Exposure to the theorists’ ideas in their own words provides a richer, more meaningful understanding. The extensive bibliography of works about the theorists included in the anthology is a valuable resource for further exploration of their works. 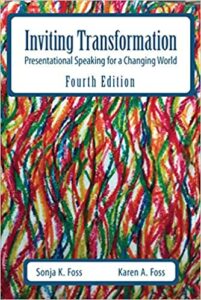 The fourth edition of Inviting Transformation continues to offer an innovative approach to presentational speaking at a very reasonable price. The authors introduce readers to invitational rhetoric, teaching speakers to clarify ideas and to work to achieve understanding for all participants in an interaction. A primary goal of presentational speaking is to create an environment in which growth and change can occur for both the audience and the speaker. The text highlights four external conditions affecting transformational environments: safety, openness, freedom, and value (honoring the intrinsic worth of all individuals).

To reflect respect for the diversity of the world, Sonja Foss and Karen Foss include options from many speaking traditions and practices to foster creativity. Discussions of all the processes of presenting—selecting a speaking goal, organizing ideas, elaborating on ideas, and delivering the presentation—emphasize inclusive speaking practices. Sample presentations provide clear and contemporary examples of the best invitational speaking practices.

The authors recognize readers as competent communicators and encourage them to think about and systematize their approaches to presentational speaking. The exceptionally accessible writing style is an aid to readers in thinking through strategies for meeting their interactional goals. Readers learn to design and deliver effective presentations for any speaking situation.

Feminist Rhetorical Theories offers feminist rhetorical theories developed from the works of nine feminist theorists who offer important insights into rhetoric and communication–Cheris Kramarae, bell hooks, Gloria Anzaldúa, Mary Daly, Starhawk, Paula Gunn Allen, Trinh T. Minh-ha, Sally Miller Gearhart, and Sonia Johnson. Each of the theories is explicated in terms of the nature of the world or the realm for rhetoric explicated by the theorist, the theorist’s definition of feminism, the nature of the rhetor or the kind of agent the theorist sees as acting in the world, and the rhetorical options envisioned by the theorist as available to rhetors. The resulting theories of rhetoric, which are substantially different from traditional rhetorical theories, re-vision rhetoric and encourage scholars to rethink many traditional rhetorical constructs.

With a broad conceptualization of rhetorical scholarship and theory in mind, editors Karen A. Foss, Sonja K. Foss, and Cindy L. Griffin have compiled essays and readings by feminist theorists whose work has relevance for rhetorical theory. This volume introduces readers to multiple feminist voices and perspectives and contextualizes theory as a way of framing experiences and events. The editors provide readers an inclusive, accessible collection of readings by key contemporary feminist theorists as well as spirited, approachable introductions to their work and their lives.

Readings in Feminist Rhetorical Theory features and pays homage to the work of nine influential theorists: Cheris Kramarae, bell hooks, Gloria Anzaldúa, Mary Daly, Starhawk, Paula Gunn Allen, Trinh T. Minh-ha, Sally Miller Gearhart, and Sonia Johnson. As the editors explain in their Introduction, these feminist theorists are featured because they have sufficiently large bodies of work that constitute coherent theories about communication or rhetoric and contribute to the re-conceptualization and transformation of rhetorical constructs and theories.

The editors introduce each theorist historically and conceptually through a brief biography and a discussion of the key ideas in the pieces selected. The works of each theorist 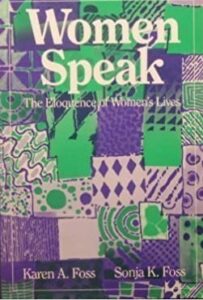 Women Speak is a collection of thirty examples of women’s rhetoric in a variety of contexts. It makes available in one volume samples of the range of women’s talk–from the informal and private to the formal and public. Using the framework for analysis provided by the authors as a starting point, students are encouraged to examine the texts as an impetus to exploring women’s communication in their own lives.

This book is no longer in print.